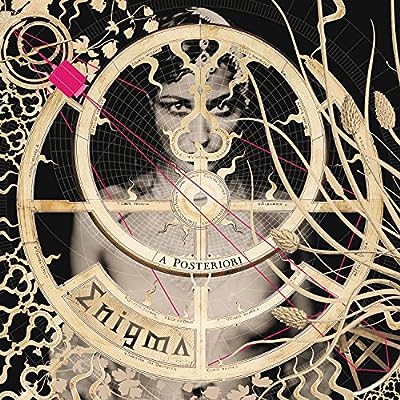 Price: $5.90
As of 2020-01-18 00:37:05 EST (more info)
Product prices and availability are accurate as of 2020-01-18 00:37:05 EST and are subject to change. Any price and availability information displayed on http://www.amazon.com/ at the time of purchase will apply to the purchase of this product.
Buy Now from Amazon
Product Information (more info)
0 0
CERTAIN CONTENT THAT APPEARS ON THIS SITE COMES FROM AMAZON SERVICES LLC. THIS CONTENT IS PROVIDED 'AS IS' AND IS SUBJECT TO CHANGE OR REMOVAL AT ANY TIME.

There are no black holes in Enigma's musical universe. Nothing ever just vanishes here. It's been 16 years since October 1st 1990, when Enigma's debut, "Sadeness Part 1," rocked the earthly airwaves and hit the top of the charts with sounds the planet had never heard. All of a sudden Enigma was no longer a UFO but the most famous spaceship of world music - and the music world. On September 22nd, 2006 A Posteriori, the sixth album of Michael Cretu's Enigma project was released.

You can get an idea of where A Posteriori is heading from song titles such as "Dreaming Of Andromeda," "Message From Io" and "Goodbye Milky Way." It takes you on a voyage through a multilayered soundscape, to the limits of your sonic experience, but always stays true to the essence of Enigma. The album will carry any hitch-hiker along to explore extraordinary new galaxies aboard the sound-ship Enigma. There is also the overture that, as on the five predecessors, welcomes the listener to Enigma's latest album, before creating the first tonal Fata Morgana 30 seconds later. Wafting through a soft carpet of sound come mysterious voices suggestive of power, shouting something Latin into this new sound-sphere—a sphere where A Posteriori will linger. Enigma once again create associative sound-signals that embed themselves in your head forever like a mental tattoo.


Sixth in a series of never-quite-the-same recordings from Michael Cretu, the Bucharest-born electronic musician/studio wiz known as Enigma, A Posteriori has the capacity to delight one camp of Enigma devotees while it perplexes another. Less overtly sensual than earlier recordings and devoid of female singers in lead-vocalist roles (no Ruth-Ann, no Sandra), A Posteriori nevertheless stands as a worthwhile recording that at its best moments handsomely displays Cretu's talents for effective songcraft and imaginative sound design. The 54-minute disc--an ode to science and discovery rather than brainy erotica--launches with two impressive instrumentals, "Eppur Si Muove" ("and yet it does move," a phrase attributed to Galileo following his heresy conviction for asserting that the earth rotates around the sun) and "Feel Me Heaven," gorgeous tracks that are part audio space probes, part pulsing Euro electronica. Momentum wanes (or chills) until Cretu strings together a series of tracks that use a heady amalgam of ambient, techno, dance, and rock textures: "Hello and Welcome," "20,000 Miles Over the Sea," "Sitting on the Moon," and the dense, edgy "The Alchemist," which evokes notions of a 21st-century version of Ultravox. "Moon" stands out in particular, guided by a subtle pop melody that exudes the gentle irresistibility of Dido's best work. Cretu wisely limits (or eliminates) the use of Gregorian chants and ethnic voices, once-fresh ideas now demoted to gimmickry. He lets his own voice, a raspy take on Peter Gabriel, carry this disc's three vocal-driven tracks to mixed effect. While not everything glitters here, enough does that A Posteriori warrants investigation by earnestly inquisitive Enigma followers. --Terry Wood

The Enigma of Flight MH370