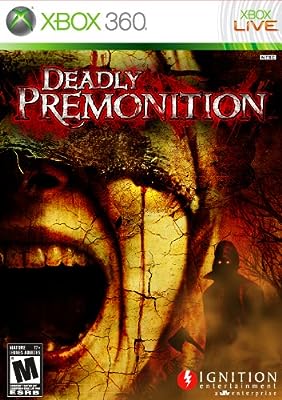 Price: $19.99
As of 2020-01-22 14:36:55 EST (more info)
Product prices and availability are accurate as of 2020-01-22 14:36:55 EST and are subject to change. Any price and availability information displayed on http://www.amazon.com/ at the time of purchase will apply to the purchase of this product.
Buy Now from Amazon
Product Information (more info)
0 0
CERTAIN CONTENT THAT APPEARS ON THIS SITE COMES FROM AMAZON SERVICES LLC. THIS CONTENT IS PROVIDED 'AS IS' AND IS SUBJECT TO CHANGE OR REMOVAL AT ANY TIME.

Deadly Premonition, developed by Access Games, is a third-person survival horror action game which puts players in the role of FBI Agent Francis York Morgan. In the process of investigating a murder, players will examine a series of interlocking mysteries in a remote rural town and will encounter an array of complex characters pivotal to the unraveling of the storyline’s mystery. Suspenseful action sequences will force players to make strategic moves, gliding by enemies in the shadows or engaging them with long-range weapons or hand-to-hand melee combat. Amidst a backdrop of soaring mountains and a town filled with eccentric natives, Agent Morgan must solve the mystery of the ‘Red Seed Murders’ and stay alive in a place where supernatural creatures and a folklore killer seek to end his investigation permanently. From the unparalleled atmosphere, music and mysterious storyline to driving vehicles and exploring the entire town, Deadly Premonition will offer players a unique and haunting interactive gaming experience unlike any other.

Lengthy campaign with over 20 hours of gameplay. A living, breathing, persistent open gameworld of investigative mystery, featuring a huge cast of unique NPCs each with their own individual mysteries to uncover. Dozens of side quests that will further immerse the player and reveal more of Greenvale's secret underbelly. A combination of over-the-shoulder shooter action, driving, and 3rd person adventure/exploration offers a variety of gameplay. Use your profiling prowess to recreate the crime with the various clues and items found at the scene and the dozens of melee, ranged and hidden weapons to defend yourself from the onslaught of evil.