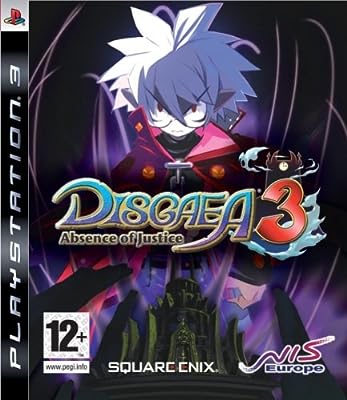 The Famed Disgaea series goes next gen on PS3! With high-definition graphics, including beautiful high-res 2D sprite art and stunning spell effects, one of the most highly-acclaimed and beloved strategy RPG series is making the jump to the next generation of gaming with Disgaea 3 Absence of Justice for PLAYSTATION 3. Re-enter the world of Disgaea and experience all of the humor, zany characters, thrilling action, and unmatched excitement in this all-new over 100 hour adventure!

The third American release in the Disgaea series by Japanese game developer and publisher Nippon Ishi, Disgaea 3: Absence of Justice marks the arrival of this acclaimed and beloved strategic RPG franchise into the Next-Gen gaming era. A PlayStation 3 exclusive, Absence of Justice features high-definition graphics, including beautiful high-res 2-D sprite character art and stunning spell effects. And although it is the third in a series of games, its story and gameplay stand on their own, allowing players both new to and experienced with the humor, zany characters, thrilling action, and unmatched excitement of the Disgaea universe to jump right into the battle.

The Story of Mao, a Demon Gone Bad
Set in and around the ?Nether Institute, Evil Academy,? the demon version of the preppiest of prep schools, Disgaea 3: Absence of Justice follows the puzzling decision of Mao, son of the Overlord of the Netherworld, who after reading a manga comic book decides to forsake his proper demonic upbringing, become a hero and attempt to overthrow his father. But in the backwards world of demon scholastics where good is bad and bad is good, Mao is a top honor student. He knows all about ditching school, being totally unhelpful and quickly resorting to violence, but nothing of the selfless nobility and patience of heroes. Heroes are for delinquents, as the number one delinquent of the Nether Institute, Raspberyl and her friends try to tell him. But Mao?s mind is made up. It's a hero he will be.

Flow of Gameplay: Events ? Base ? Battle ? Repeat
Events: Players advance through the game as events unfold. These events can occur during the story, at your base, or before/after battles. You will be able to witness the fun and interesting interactions through a mixture of sprite animation and exciting character battles.

Base: Mao's school, the Nether Institute, Evil Academy is the base point of the game. Players will be able to prepare for upcoming battles here by purchasing new weapons and items, customizing characters and/or restoring health.

Character Customization: The Evility System
Character customization is crucial in all role-playing games. Absence of Justice allows for maximum character customization through its "Evility System." There are two different categories of evilities: evility that is already set for each character depending upon the jobs of each and evility that players can customize. Customizable evilities include: evility to acquire the special skills for certain weapons, evility to up character status under certain requirements, evility to up the amount of experience points earned, evility to enable special skills and functions, etc. This variety is powerful and important. You may have only one kind of evility that supports a character's status, but you may have multiple evilities for skills. Use this system to create and customize your characters and ideally group multiple evilities in one to conduct battles more efficiently.

The Disgaea 3 Battle System
Combat in Disgaea 3: Absence of Justice consists of a combination of the franchises familiar standard system of attacks, along with a whole new array of moves debuting with the game. This wide range of possibilities allows players to pick and choose tactics that suit the immediate conflict before them or to quest for overall success in the game, and maximum fun by attemping to master all. Attacks and skills include:Will Mao be able to become a hero and defeat the Overlord? Or will Raspberyl and the demon delinquents convince him to return to his honor role ways? It all depends on you, and so the troublesome, devilish story begins.