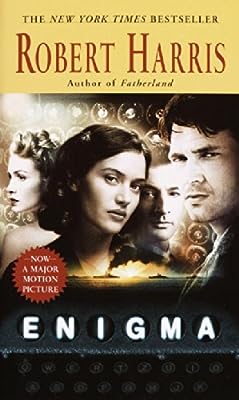 Price: $7.99
As of 2020-01-17 20:50:02 EST (more info)
Product prices and availability are accurate as of 2020-01-17 20:50:02 EST and are subject to change. Any price and availability information displayed on http://www.amazon.com/ at the time of purchase will apply to the purchase of this product.
Buy Now from Amazon
Product Information (more info)
0 0
CERTAIN CONTENT THAT APPEARS ON THIS SITE COMES FROM AMAZON SERVICES LLC. THIS CONTENT IS PROVIDED 'AS IS' AND IS SUBJECT TO CHANGE OR REMOVAL AT ANY TIME.

"LITERATE AND SAVVY . . . BRIMS WITH WARTIME INTRIGUE."
--The Washington Post Book World
England 1943. Much of the infamous Nazi Enigma code has been cracked. But Shark, the impenetrable operational cipher used by Nazi U-boats, has masked the Germans' movements, allowing them to destroy a record number of Allied vessels. Feeling that the blood of Allied sailors is on their hands, a top-secret team of British cryptographers works feverishly around the clock to break Shark. And when brilliant mathematician Tom Jericho succeeds, it is the stuff of legend. . . .
"A TENSE AND THOUGHTFUL THRILLER."
--San Francisco Chronicle
Until the unthinkable happens: the Germans have somehow learned that Shark has been cracked. And they've changed the code. . . .
"SUSPENSEFUL AND FASCINATING."
--The Orlando Sentinel
As an Allied convoy crosses the U-boat infested North Atlantic . . . as Jericho's ex-lover Claire disappears amid accusations that she is a Nazi collaborator . . . as Jericho strains his last resources to break Shark again, he cannot escape the ultimate truth: There is a traitor among them. . . .
"GRIPPING . . . CAPTIVATING ."
--New York Daily News
"ELEGANTLY RESEARCHED . . . Readers will find themselves perfectly placed to experience one of Britain's finest hours."
--People
"SATISFYING . . . Harris does a crackerjack job here, playing his characters' lives off historical events in surprising ways."
--Entertainment Weekly
"SUSPENSEFUL . . . FIENDISHLY CLEVER."
--Detroit Free Press

A gripping World War II mystery novel with a cryptographic twist, Enigma's hero is Tom Jericho, a brilliant British mathematician working as a member of the team struggling to crack the Nazi Enigma code. Jericho's own struggles include nerve-wracking mental labor, the mysterious disappearance of a former girlfriend, the suspicions of his co-workers within the paranoid high-security project, and the certainty that someone close to him, perhaps the missing girl, is a Nazi spy. The plot is pure fiction but the historical background, Alan Turing's famous wartime computing project that cracked the German U-boat communications code, is real and accurately portrayed. Enigma is convincingly plotted, forcefully written, and filled with well drawn characters; in short, it's everything a good technomystery should be.