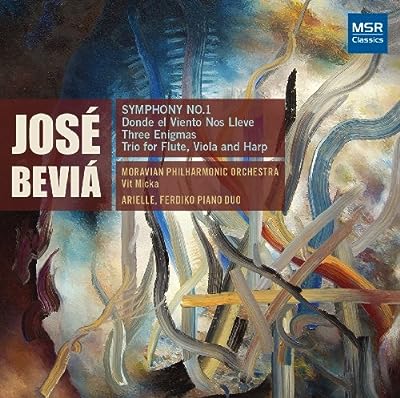 Price: $6.89
As of 2020-03-27 15:54:59 EDT (more info)
Product prices and availability are accurate as of 2020-03-27 15:54:59 EDT and are subject to change. Any price and availability information displayed on http://www.amazon.com/ at the time of purchase will apply to the purchase of this product.
Buy Now from Amazon
Product Information (more info)
0 0
CERTAIN CONTENT THAT APPEARS ON THIS SITE COMES FROM AMAZON SERVICES LLC. THIS CONTENT IS PROVIDED 'AS IS' AND IS SUBJECT TO CHANGE OR REMOVAL AT ANY TIME.

José Beviá graduated from the Valencia Conservatory of Music where he studied classical piano with José Luis de Prado; Berklee College of Music, and Florida State University where he earned a Doctor of Music Degree in Music Theory and Composition. Mr. Beviá has studied composition with Ladislav Kubík and Mark Wingate, and jazz piano with Marcus Roberts and Bill Peterson. He has also participated in composition seminars with Pulitzer Prize winning composer Ellen Zwilich, and has been a member of the BMI Jazz Composers Workshop, where he studied with jazz composers Michael Abene, Jim McNeely, and Mike Holober.

An Associate Professor of Music at County College of Morris in Randolph, New Jersey, Mr. Beviá has seen his classical and jazz compositions performed in Spain, the Czech Republic, The Netherlands, and the United States. His works have been commissioned by The Commission Project and the BMI Foundation Charlie Parker Composition Prize. At the same time he has been invited to present his music at the 2008 International Jazz Composers Symposium in Tampa, Florida; the Society of Composers National Conference in Turlock, California; the College Music Society National Conference in Portland, Oregon; and the Czech American Music Summer Institute in Prague, Czech Republic. The University of Northern Colorado Jazz Press publishes his compositions worldwide.

The Enigma of Life