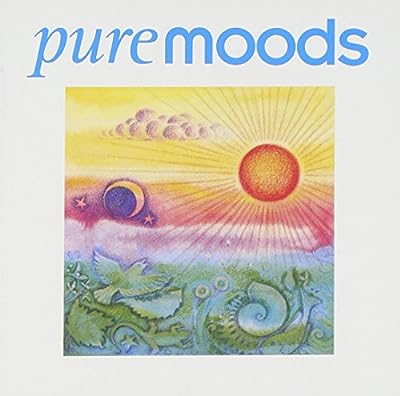 Price: $8.53
As of 2020-01-16 07:59:25 EST (more info)
Product prices and availability are accurate as of 2020-01-16 07:59:25 EST and are subject to change. Any price and availability information displayed on http://www.amazon.com/ at the time of purchase will apply to the purchase of this product.
Buy Now from Amazon
Usually ships in 24 hours
Product Information (more info)
0 0
CERTAIN CONTENT THAT APPEARS ON THIS SITE COMES FROM AMAZON SERVICES LLC. THIS CONTENT IS PROVIDED 'AS IS' AND IS SUBJECT TO CHANGE OR REMOVAL AT ANY TIME.

New Age music, ambient electronica, and spiritualized hip-hop received their first major, K-Tel-like treatment in 1996 when Virgin Records assembled Pure Moods. The "As Seen on TV" compilation quickly became a hot seller, and it would be nice to think that its popularity has as much to do with the music as the marketing. To be sure, Pure Moods offers genre hits aplenty: from Enya's "Orinoco Flow" to "Sadness" from Enigma; from a dance mix of the "X-Files Theme" to edits of vintage electronica from Mike Oldfield (Tubular Bells) and Jean Michele Jarre (Oxygene). Beyond other selections of beat-enhanced chants and a few other popular themes ("The Mission," "Twin Peaks"), the album, refreshingly, also includes a few selections noteworthy only for their originality and quality. A three-track section near end of the 70-minute disk features affecting soft African chants from Geoffrey Oryema, followed by "My Wife with Champagne Shoulders," a dollop of regal, faintly ethereal romanticism from master film scorer Mark Isham, then a robust piano workout, "The Promise" from Michael Nyman (The Piano). With so many elements of interest on its 17 tracks, the album's broad diversity is sure to have broad popularity. --Terry Wood