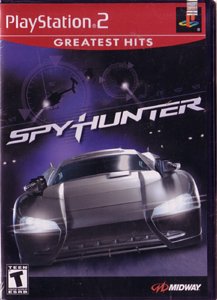 Price: $15.99
As of 2020-01-16 22:22:20 EST (more info)
Product prices and availability are accurate as of 2020-01-16 22:22:20 EST and are subject to change. Any price and availability information displayed on http://www.amazon.com/ at the time of purchase will apply to the purchase of this product.
Buy Now from Amazon
Usually ships in 24 hours
Product Information (more info)
0 0
CERTAIN CONTENT THAT APPEARS ON THIS SITE COMES FROM AMAZON SERVICES LLC. THIS CONTENT IS PROVIDED 'AS IS' AND IS SUBJECT TO CHANGE OR REMOVAL AT ANY TIME.

Prepare to be hunted. The evil NOSTRA Corporation is preparing to unleash havoc on the world and only the Spy Hunter is equipped to stop it. Strapped behind the wheel of the powerful G-6155 Interceptor, the Spy Hunter is the world's last chance. Relying on an incredible arsenal of both offensive and defensive weapons, the Spy Hunter must elude NOSTRA spies, henchmen and assassins at any cost if civilization is to be saved.

Based on the arcade classic, SpyHunter is a mission-based combat racing game that puts you behind the wheel of the G-6155 Interceptor. Not just any car, the Interceptor is the ultimate counterintelligence prototype vehicle. First, it's turbocharged and ready to go with 845 horsepower for lightning-fast speed. That's not all--there's an arsenal of futuristic weaponry and morphing abilities to turn the car into a speedboat, jet ski, or motorcycle. Basically, it's everything you need to undertake 14 high-adrenaline missions on wheels.

Should you choose to accept these daring reconnaissance missions, you'll travel to Panama, England, the Middle East, Venice, and other exotic locations around the world. Each location is rendered with a high degree of realism and provides recognizable landmarks and scenery. Throughout, you're the hunter as well as the hunted, pursued by enemies over land, on water, and in the air. Your mission is to take on NOSTRA, an out-of-control multinational corporation headed by an evil madman who's threatening the world.

As SpyHunter, you must always be ready for heavily armed enemy vehicles that lurk around every corner and strike at the first site of the Interceptor. But you have a steady supply of weapons trucks that load you up with machine guns, missiles, lasers, and counterattack weapons such as oil slicks, smoke screens, and cluster mines. Each successful attack gets you one step closer to revealing who SpyHunter is and what he's ultimately after.