Star Wars vs. Star Trek: Could the Empire kick the Federation's ass? And other galaxy-shaking enigmas 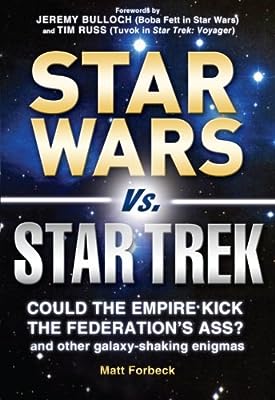 Price: $14.95
As of 2020-04-05 01:18:23 UTC (more info)
Product prices and availability are accurate as of 2020-04-05 01:18:23 UTC and are subject to change. Any price and availability information displayed on http://www.amazon.com/ at the time of purchase will apply to the purchase of this product.
Buy Now from Amazon
Product Information (more info)
CERTAIN CONTENT THAT APPEARS ON THIS SITE COMES FROM AMAZON SERVICES LLC. THIS CONTENT IS PROVIDED 'AS IS' AND IS SUBJECT TO CHANGE OR REMOVAL AT ANY TIME.

Could a Jedi knight use his light saber to deflect a beam from a phaser?
Which aliens are cooler: the Cardassians or the Chazrach?
Have any Federation ships ever made the Kessel run in less than twelve parsecs?
And most important, in a fight between the Empire and the Federation, who would win?

Ever since Princess Leia's starship hovered into sight on the silver screen, fans of Star Wars and Star Trek have been debating these questions. Now, side by side, they can line up aliens, technology, story points, weaponry, and heroes from the two great science fiction/fantasy stories of our age.

For fans everywhere, this volume offers detailed information about both universes, as well as trivia, quizzes, quotes, and information drawn from these two iconic settings. So phasers on stun and light sabers at the ready! It's time for the duel to begin.